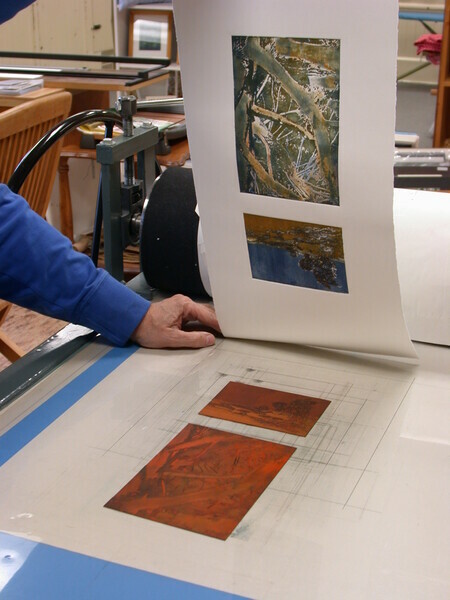 See video of photopolymergravure, a printmaking process, below.

A short summary of terms for those unfamiliar with printmaking:

A general definition for printmaking is almost impossible, as there are so many different techniques and so many variations on these techniques. However, basic to all aspects of printmaking techniques seems to be that they almost all involve a transfer from a plate or matrix to a receiving substrate, most commonly paper. Unique to the printmaking process is the ability to create multiples of the image. Each print is considered an original work of art when the artist both conceives and has a hand in its production. Works printed from a single plate create an edition, in modern times usually each signed and numbered to form a limited edition. A single print could be the product of one or multiple techniques.

An original work of art produced by creating imagery on a plate and then transferring it through pressure onto the final surface, usually paper. The pressure can either be applied by hand, as in relief methods, or with an etching press for intaglio plates

A print made from a painting on a non-absorbent surface such as glass, Plexiglas, or metal that is transferred to paper either by the pressure of the hand or an etching or lithographic press. It is sometimes possible to pull a second or "ghost" impression from a monotype plate, especially if a press is being used. Often the artist will rework areas of the plate between the first and second printings or use more than one plate, but the second impression is never exactly the same as the first. Many types of pigment can be used, including oil paints, acrylics, printer's ink, enamels, watercolors, and gouache, depending on the desired effect. Whatever the pigment, the transfer process entails a metamorphosis between the image as drawn or painted on the plate and the image as it ultimately appears on the paper. The monotype is considered the most painterly of the printmaking techniques. What distinguishes the monotype from a painting are the textures and effects created by the pressure of the printing. What separates it from other printmaking processes is that it produces a one of a kind image with no possibility of edition work.

A monotype combined with a partially worked etching, lithograph, screen print, or relief print. This technique produces a series of prints in which the worked image is constant but the monotype work is different in each impression. In essence a monoprint is made using a repeatable matrix in a non-repetitious fashion.

A monoprint can be one of a series--therefore, not wholly unique. It begins with an etched plate, a serigraph, lithograph or collagraph. This underlying image remains the same and is common to each print in a given series. Other means of adding pigment or design are then employed to make each print in the series different. The series of monoprints has a limited number of prints and each is numbered.